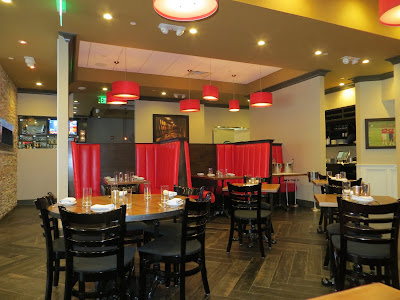 We'd been waiting for several months to try Desi's. Although we were anxious to stop in, we like to wait a few months before we visit a new restaurant. It's not unusual for a new place to have some kinks to work out. We like to allow some time for those kinks to get resolved. We went for our first visit on a Thursday. If Desi's did have any kinks, they've been ironed out.

The chefs at Desi’s are highly trained. And it shows. Head Chef Kenneth West and his assistant chefs pay as much attention to the appearance of the dishes as to the taste.

The restaurant is still new and has the glow of newness. The dining room has attractive wood floors and wood tables as well as curved red leather booths along two walls. Good-looking glassware and silverware add some sparkle to the tables. Unlike at a lot of restaurants, diners here are given fresh silver with each course.

We thought the service was excellent. Our table was ready at the time we’d booked for. The manager came over to our table and introduced himself to us. Our waitress was delightful, full of smiles and good cheer. She was attentive without being intrusive. The courses were served in a timely manner, neither too fast nor too slow.

We sat in the dining room but could see through to the bar which had a lively after-work crowd sitting at the bar and at the high top tables. There’s a separate menu for Bar Snacks. It consists of seven  items such as Bacon Grit Fritters, a Jersey Pretzel, and a Desi Burger.

The Dinner Menu includes Raw Bar items and On the Half Shell items, all of which seem to be popular offerings here. Then there is also an interesting assortment of Starters to choose from. The Pasta part of the menu includes three items. The Main Entrees part of the menu includes ten dishes, several fish items among them. The menu is limited and there are no daily specials, but we easily found something to tempt us in each course.

Bread was served along with oil which seemed to be unseasoned. This was the only item that seemed a bit flat to us.

For starters we had an order of clams on the half shell. These were very fresh and came with two sauces.

Our other starter was a salad of Romaine with avocado, bacon, and bleu cheese dressing. Two delicious touches in this salad were the scalded and peeled cherry tomatoes and the slivers of crispy fried onions that topped the salad.

For entrees we had the only Chicken dish offered. This was delicious. The skin of the chicken was crisp and beautifully seasoned. This was served with black-eyed peas mixed with tiny diced carrots, an unusual and tasty vegetable combination. This also came with a sauce verte for dipping.

Our second entree was Pasta Alla Chittara. The chittara pasta was topped with clams and paneetta and a light clear sauce. The pasta dish came in two sizes with two different prices. We ordered the smaller plate which was small but satisfied as it followed an appetizer. Heartier appetites might be well advised to order the larger plate.

Desi's is one of a handful of area restaurants that has its own pastry chef. Pastry Chef Tiffany Parascand has trained under some top pastry chefs and in some elegant restaurants. This background is reflected in her desserts. Our first indulgence was the Brownie Bread Pudding. This seemed to us more brownie than bread pudding but was delicious. The fudge sauce added to the decadence as did the petite scoop of salted caramel gelato.

Our second indulgence was the Cheesecake with Amaretti Crust. This was served in a deep dish, placed on top of lemon curd, and topped with blueberries. This was very pretty, unusual, and delicious.

We observed several negative reviews at Yelp. A few mentioned being disappointed with the brunch. Brunch? Desi’s isn’t open until 5:00 PM and is closed on Sundays. Did they have brunch at one point? Or is this another example of Yelp reviews being unreliable?

We very much enjoyed our first visit to Desi's. We recommended the restaurant to our daughter and son-in-law who stopped in several nights later and also gave three cheers for Desi’s. We’ll all be back again soon.