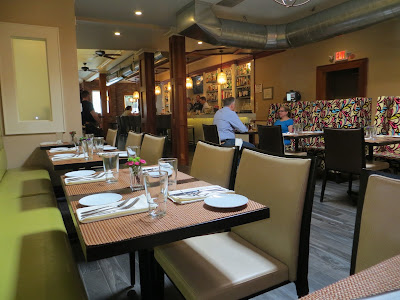 Opened in October 2014, Ariane Kitchen & Bar quickly generated a lot of buzz and recognition from such reviewers as the New York Times and New Jersey Monthly. We stopped in on a Thursday night to see for ourselves what all the buzz was about. It’s about great food, service, and atmosphere.

The head chef is co-owner Ariane Duarte, a graduate of the Culinary Institute of America. She has extensive experience in the kitchen having previously worked at Highlawn Pavilion in West Orange, her husband’s family restaurant in Chicago, and CulinAriane which she and her husband, Michael, owned in Montclair. Soon after Ariane’s appearances on television’s Top Chef Season 5 and later on Iron Chef, they found themselves fully booked every night and bursting at the seams at CulinAriane. So when they had the opportunity to open a new place in Verona with John MeEvoy, they grabbed it. Michael, also a graduate of the Culinary Institute, manages the restaurant.

There are three dining areas in the restaurant. The bar area has high top tables for diners. Opening off that area is a small dining room with floor tables. At the back of the restaurant, beyond the bar, is the third dining area which has banquet seating on both sides of the room. The decor is contemporary and upbeat.

We were seated by the hostess. Our server soon arrived to take drink orders, give us the menus, and tell us the evening’s specials. The menu is limited but the chef offers one special appetizer and one entree each night and the menu changes four times a year. We had a number of questions for our server, all of which he was able to answer.

We both wrestled with our choices, being tempted by several items. After we placed our order, we were served a basket of the most delicious croissants we’ve ever had—petite, delicate, and  flaky with just a hint of something sweet on the top. We grilled our server and learned that these are baked daily by the restaurant’s pastry chef. If nothing else had been good, we still would have considered our visit a good one if only for the croissants.

But there was more, all of it beyond good. One of us began with the special salad that included a bed of lettuce surrounded by deep-fried rock shrimp and topped with sautéed onions, nuts, and bits of cheese. The dressing was outstanding.


Our other appetizer was artichokes stuffed with goat cheese and drizzled with toasted garlic aioli. An unusual and tasty dish.


Our first entree was Crab meat stuffed flounder, served with spinach, pomegranate, and corn sauce. The stuffing was delicious as was the entire dish. It tasted as good as it looked.


Our second entree was a half chicken that had been brined in sweet tea which gave the exterior a nice color and flavor. The chicken was drizzled with a dark jus and nestled on a bed of very smooth and creamy mashed potatoes mixed with peas.

Then onward to dessert. Lew ordered the dessert that the waiter said was his favorite: chocolate, peanut, ice cream sandwiches filled with salted caramel ice cream. The sandwich part was homemade crispy cookies. This is now one of our favorite desserts, too! Loved those little sandwiches.


We’re both bread pudding fans. The pastry chef offers a special bread pudding each night. On our night the pudding was baked with some chocolate and marshmallows and then topped with toasted coconut. To make this completely irresistible, the pudding was surrounded by a fudgy chocolate sauce. The bread part was made from the previously mentioned croissants. The result was the lightest, fluffiest, best bread pudding we’ve ever had.


Ariane Kitchen & Bar is slightly pricier than the other restaurants we’ve visited but not bad at all. And there’s a good range of prices to choose from. We’ll most definitely be back for more. In fact, we can't wait to return.