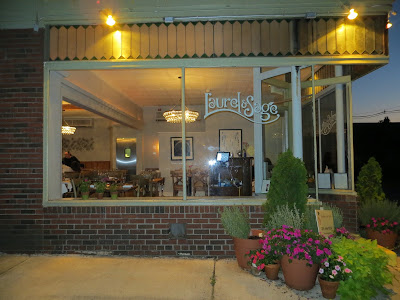 Chef/Owner Shawn Paul Dalziel grew up in a California restaurant owned by his family and has since gained experience in a variety of places. He is a graduate of the California Culinary Institute, has trained in a number of fine restaurants, and has served as the Executive Chef in several New York City restaurants. His experience shows as does his magical touch with food.

Dalziel opened this latest addition to Montclair's restaurant scene in 2015. Located in the spot previously occupied by Ariane Duarte's popular CulinAriane, Laurel & Sage is carrying on the tradition of outstanding cuisine at this corner location.

Dalziel and his wife completely renovated the restaurant, opening up the space and adding a hip contemporary decor. The tables are made of beautiful wood as are the chairs. A hard wood floor, soft gray walls hung with minimal art, and simple but elegant ceiling fixtures make the restaurant feel comfortably spacious and special.

We were welcomed by the wait staff, and since we were early, we were given our choice of table. Our server reviewed the menu and informed us that while they don't usually have daily specials they did have clams on the half shell and Alaskan King Crab Legs that Thursday night. We had several questions which were nicely answered.

After we placed our orders, a server came over with a big square basket of homemade breads and popovers. We adore popovers which we've not seen served anywhere else, so we pounced on those. That night the chef had prepared two kinds of popovers, one with gruyere cheese and the other with rosemary. We'd be hard-pressed to choose a favorite. They were mouth-wateringly good. We also sampled the delicious mini-croissants.

Then we were served a mini-course called the Amuse Bouche. This is a complimentary sample of something special that the chef prepares for each night's diners. It came as a delightful surprise. Our sample was a lamb slider with slivered peppers and a tasty sauce. Our mouths were indeed pleasantly amused.

Then came a baby beet and greens salad. This included both red and gold beets, the latter which we'd never had before but hope to have again. The salad also included goat cheese, candied pecans, and bacon, all tossed with a really wonderful vinaigrette. Our other appetizer was a dozen clams on the half shell. These were immaculate and very fresh.

For entrees we had one order of the soft shell crab. This was coated and deep-fried so that it was nice and crispy. The crab was broken up and served with a zesty corn salsa and some corn pudding.

Our second entree was a stuffed airline chicken breast. We found this dish to be especially delicious and unusual. The skin was crispy and beautifully seasoned. The chicken breast was stuffed with chicken sausage, served in round slices, and placed on top of farro pilaf which we thought similar to barley. All of this was surrounded by a delicious jus flavored with whole grain mustard and containing little mushrooms and other vegetables.

Our second dessert was the Apple Strudel. This dish is made to order so the flaky phyllo pastry and the apples were warm. This was topped with a sweet caramel sauce and served with a scoop of ice cream.

Prices here are on the high side, but there's a range and you could skip dessert, though we don't recommend doing so. Laurel & Sage is now one of our favorite restaurants. We enjoyed everything about the place from the atmosphere, to the popovers, to the fabulous dishes. Laurel & Sage offers truly fine dining. We look forward to a return visit. And soon!